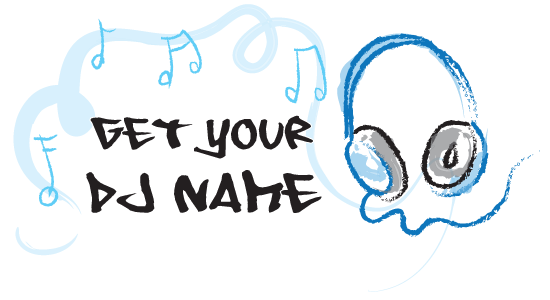 Unless you’re one of the lucky ones who’s happy to use their own name when DJing, one of the first things you’ll do as a new DJ will be choose your name. It’s a massively fun thing to do, of course, but it also has lots of pitfalls for the unwary.

Get this wrong and you’re stuck with something you’ll regret. I guarantee you that your parents spent months thinking of your name before you were born – you should definitely put the same effort into getting your DJ name right. It’s really tempting to pick one in a hurry, but if anything comes of your DJ career, you’re stuck with it for life – so don’t make that mistake!

In today’s post, we’re going to look at some basic principles for getting your DJ name right, then give you a massive list of places you can go and things you can try in order to find the perfect DJ name.

10 Rules Of Choosing A DJ Name

If you call yourself “DJ…”, that’s what you’ll always be thought of. What if you end up wanting to produce music? Think this one through, because nowadays, the line between DJs and producers is more blurred than ever, but while people who aren’t called “DJ…” most certainly get booked to DJ, those who are will forever be labelled a “DJ” above all else. My advice? Avoid using “DJ” in your title.

2. Make sure your name passes the “radio test”

If your name was read out on the radio, would the presenter be able to pronounce it properly from the way it is written? (“Pete Tong” is hard to mispronounce, for instance.) And if somebody listening to that radio station heard your name, would they be able to write it down correctly? (Again, most people would get “Pete Tong” right first time, I think.)

This is vital because if people can’t say or write your name correctly, they won’t be able to look you up online, and won’t want to talk about you (nobody likes the embarrassment of mispronouncing a name).

3. Think about what the name you’re considering suggests

Calm, anger, noise, harmony, fun, edginess? Does it reflect or distract from the music you play? Or is it just abstract, bearing no resemblance to anything (there’s nothing wrong with that, by the way). You may be tempted to pick a “bad” DJ name, because it sticks in the head – but as this Top 25 Bad DJ Names article rightly points out, it’s better that your music and performances are the things that are memorable, rather than the fact that you’re called “DJ Mucus”!

4. Think to the future, not just now

Will you still be playing dubstep to 15-year-olds when you’re 40? Or will you be scoring films, having had a fantastic career as a music producer and EDM megastar? Does the name you’re considering have enough longevity about it to last you all that time? In other words, is it universal enough to fit different hats as you move through your career?

5. Think about the logo version

You’re going to need a logo. It’s one of the big things that’s changed in the last few years. All the big DJs have a logo. It looks great on flyers, and stands them out from all the other DJs listed in a standard typeface on those club flyers. But think about how your name will look as a logo. Is it took long for a designer to do anything with? Are there other complications? (Lots of “m”s and “w”s can make for a messy logo, for instance…)

6. Try your name out in any second languages in your area

For instance, how does your name work in Spanish (if you’re an English speaker living in a mixed neighbourhood with Spanish speakers)? Can a Spanish speaker pronounce it? Does it mean something stupid or rude? You’ll kick yourself if you don’t bother to find this out and it turns out that it does…

7. Consider more than one name

What?! Surely that’s going against all of this? Well, hear me out, because this isn’t as crazy as it sounds. Say you’re a deep house DJ by passion, but also a mobile DJ to make ends meet. Would you want to use the same name for both “sides” of who you are? Probably not. People with this kid of dual role are extremely common, and it is well worth deciding if you want a name to represent your more “artistic” side, and one to represent your bread-and-butter “day” DJ job side.

Here’s a tip: If you Google your prospective name using quotes around it, Google will search for the words in that order – it’s an easy way of seeing if you’re name’s “taken”. (For instance, “Phil Morse” won’t return articles with those two words in it unless they’re one after the other in that order.) To take this a stage further, run your search on Namecheck, which will check social media sites etc for you too.

9. Consider the URL you want to use

Even if you don’t plan on having a website immediately, you should buy the .com (.com is best). Some really big companies, products and brands don’t use their exact name as the URL…

Ideally, you want the exact match to the name you’ve chosen. But if that’s not available, you can have a variant as your .com, or even go for a .dj or other clever domain variant. Some really big companies, products and brands don’t use their exact name as the URL, and so this isn’t necessarily a deal-breaker. You can always put the DJ afterwards (“hercules-dj.com” if you want to call yourself “DJ Hercules” and that is taken, for instance), or add “hq”, or even a word like “official”, or just some other clever variant.

Weigh this up with how much you want the name you’ve come up with. If it’s taken by a house building company, for instance, that’s obviously better than the exact URL being taken by another DJ. Check Twitter, Facebook and YouTube URLs while you’re at it, as mentioned above.

10. Ask other people what they think of your name

Don’t be bullish and just go for something – check with as many people as possible, and ask them why they like (or don’t like) your name. And while you’re at it, ask them to come up with names or variations of what you’ve chosen! They may hit on just the right name for you.

Time to start searching…
So having outlined some basic rules, it’s time to take that big, blank piece of paper and start the search!

Here’s some tips. Take words that mean something to you, and combine them, with each other, with numbers, with one of more of your own names. Keep a sheet of words you like and try and combine those. Nothing’s too stupid at this stage: Write everything down (this is brainstorming, not trying to make everything you come up with good). Once you’ve got a shortlist, that’s the time to go back to the rules above and work out the best one of the lot. Don’t try and name yourself in one session – keep coming back to it, and have faith – you will get there.

Of course, you’re going to need some “seed” words, some places to start, some ideas of avenues to go down. You could modify your own name. You could start with someone else’s name, or even an existing DJ’s name. Or, you could start your search by getting your ideas from the sites and tactics we’ve listed below. Here, you should find plenty to keep your quest going below. Good luck!

0 Replies to “How To Find The Best DJ Name”