The new album from the biggest group in rap is very long, and mostly about cars and drugs. But there’s comfort in repetition – and some genuine eeriness and melancholy. 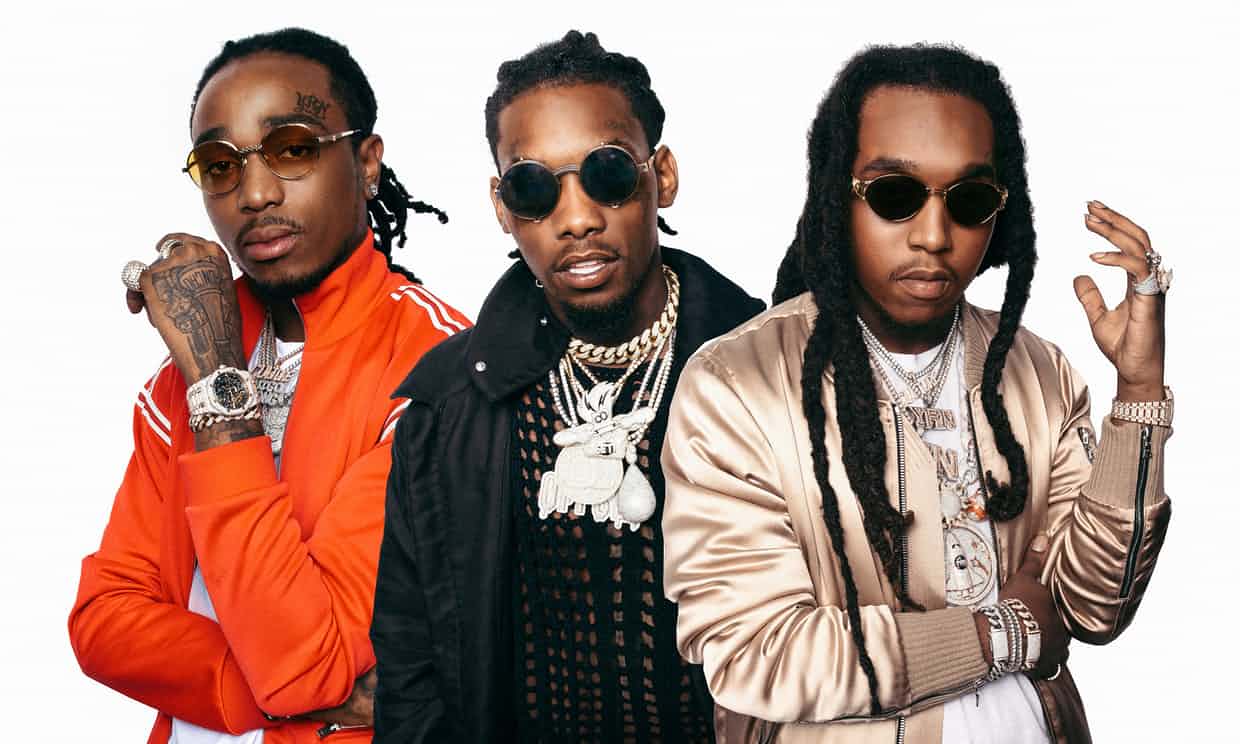 No one could ever accuse Migos of being parsimonious with their talents. Their third studio album clocks in at a hulking 24 tracks, spread over 106 minutes. That’s pretty colossal, even by the standards of hip-hop albums, regularly bloated with skits and umpteen guest appearances, but it somehow fits with what you might call the Migos brand.

The trio were recently hailed by Rolling Stone as “shapers of the culture … the most influential group – of any genre – of the last few years”; even someone who professes to have never heard of them before, who’s somehow managed to avoid their quadruple platinum 2017 single Bad and Boujee, could get a hint of how huge they currently are from Drake’s guest appearance on Culture II, which he largely spends telling Migos how big a fan he is and how long he’s been a fan for. It’s not a position they’ve attained via a subtle campaign of self-effacing understatement and shy charm. Everything about them speaks of bombastic flamboyance, from the press interviews they conduct at home, literally surrounded by piles of money, to the size of their album, and their carpet-bombing of the US charts throughout 2017 – no sooner had a single featuring a Migos guest appearance started to slide down the chart than another one suddenly appeared.

At least part of their appeal is founded in escapism: in an increasingly woke hip-hop world, they remain steadfastly devoted to extravagance and excess. In fact, Culture II’s closer, Culture National Anthem, touches lightly on racism and taking the knee, but for the most part, Culture II sticks to the tried-and-tested topics of selling cocaine and how rich and successful Migos are.

There are tracks that sound like property inventories: endless lists of the trio’s possessions, from cars to clothing to watches. God, the watches: you learn so much about rapper Offset’s two-tone rose gold Patek Philippe Nautilus and Audemars Piguet Royal Oak Skeleton and indeed bandmate Quavo’s Rolex – a “plain jane” model, devoid of diamonds – that it occasionally feels less like a hip-hop album than a two-hour course in horology.

It’s often done with a lot of wit – “this ain’t even all my jewellery!” cries Quavo after one particularly lengthy enumeration, his voice bolstered by a spectacularly melodramatic Vocoder effect – but there’s no getting around the fact that listening to someone tell you how wealthy they are for an hour and 45 minutes wears on the nerves a little.

Still, if their vast fanbase cared about Migos harping endlessly on the same themes, they would have packed in listening to them years ago. Instead, there are affectionate videos and memes out there devoted to how many times Migos have repeated themselves – one notable example collates 50 separate mentions of their love of drop-top cars – which rather suggests that their slightly monotonous lyrical bent might be part of their appeal: perhaps, in a world filled with uncertainty, there’s a value to knowing precisely what you’re going to get.

And, crucially, however repetitious the lyrics get, the music on Culture II seldom follows suit. No artist, however great and important and epoch-defining, ever made an album this long that couldn’t have done with a nip and a tuck – even the band Migos are so regularly and favourably compared to, the Beatles, could have stood to lose Savoy Truffle and Ob-La-Di, Ob-La-Da from The White Album – and there are certainly a few longuers on display during Culture II, not least the nondescript Beast and Emoji a Chain, which somehow seems to go on for a lot longer than its five-minute run time.

But, for such a gargantuan album, it’s surprisingly light on its feet, skipping nimbly between musical styles: the layered, rich, vaguely G-funk-like finale of Culture National Anthem and the teeming sound of Superstars a marked contrast to the sinister Flooded, on which eerie electronics creep around the vocals like mist, or Too Much Jewelry, based around what sounds like a meandering, jazzy piano improvisation. You’re struck by the sense of outside producers forced to bring their A-game because they’re dealing with a band at the summit of their genre – both the warm 70s soul samples of Kanye West co-production B.B.O and the Pharrell Williams-helmed Stir Fry are fantastic, the latter a slice of spare, humid, hook-filled funk that harks back to Neptunes productions from the early 00s. But you’re also struck by how creative and adaptable a producer Quavo can be: it’s him who comes up with both Autopilot’s chilling mix of cavernous echo and steely synth arpeggios and Narcos’ appealingly skewed take on the current vogue for Latin American-influenced pop, the acoustic guitar fading in and out as if heard on a badly tuned radio.

And, slap bang in the middle of the album, there’s something intriguingly out of step with the rest of what’s on offer. Gang Gang is supposed to be an ode to the trio’s undying fraternity, but there’s something melancholy about it, both the music – minor chords and a muffled, wordless female vocal sample – and the curious note struck by the lyrics, at least initially. “Would you love me if I ran away? I know you probably think I’m insane,” offers Quavo, before mentioning the impossibility of going anywhere without being recognised. It sounds oddly weary, a little more subdued and self-examining than you might expect from a man who elected to get engaged to his girlfriend onstage at the Wells Fargo Centre, Philadelphia. Moreover, it hints at a certain complexity and depth you don’t really see elsewhere on Culture II. Then the moment passes and they start talking about cars and cocaine again.