BEVERLY HILLS, Calif. — On the first day of summer, two days before the release of his new album, “Grateful,” the hip-hop producer DJ Khaled was sitting in a powder room in his mansion here: a turreted affair across the street from the home of Slash, the Guns N’ Roses guitarist. Befitting a superhero (of social media, at least), the man born as Khaled Mohamed Khaled was wearing a black polyester cape — but it was merely for that most mortal of obligations, a haircut.

As a barber circled him, brushing black dye into his buzz cut and beard, Mr. Khaled scrolled through the infinite stream of comments from his 6.7 million Instagram followers; fist-bumped guests that Kiko, his personal assistant, let into the house; debated whether to turn on the pool heater before punting the decision to his fiancée, Nicole Tuck, who was in New York; and waxed poetic about gardening, the pastime that has kept him grounded during his ascent from Miami disc jockey to auteur of ubiquitous club bangers like “Wild Thoughts” (his song featuring Rihanna and a Carlos Santana sample that is currently high on the charts) and “I Got the Keys.”

“Don’t forget, if we didn’t have this house built, these streets, what would be here?” he said, gesturing at the cobblestone driveway, where two uniformed workers were cleaning the interior of his bright blue Rolls-Royce. “Trees, flowers, Mother Nature.”

As hair must be pruned, so must flowers and plants. Mr. Khaled, 41, has loved the outdoors since he grew up in Florida, playing soccer and basketball and fishing in open waters. His parents, Palestinian immigrants, worked in the clothing business, but when suits fell out of fashion and his father had to close down his men’s formal wear store, Mr. Khaled turned to D.J.ing and used the money he made from various gigs to support his family.

Aligning himself with marquee M.C.s and singers (Jay-Z, Rihanna, Drake) and avoiding dis tracks in favor of coining positive catchphrases like “bless up” have given Mr. Khaled a golden reputation, even if some critics seem unclear about what, exactly, he does. (He samples beats from various artists and blends them together to create infectious anthems.) Often, he yells out a motto — “We the best!” It’s embroidered on his bathrobes.

In his spare time, Mr. Khaled tends, along with some hired help, lush gardens at this home and another in Miami, or at least looks at them while doing other things.

“Say I had to get on a conference call, I’d go outside by the hammock, by the flowers, and just sit there, and if it’s a stressful call, I really get close to the flowers,” he said. “People say, ‘Respect your mother.’ I say, ‘Respect Mother Nature.’”

A visitor wondered about his reaction to President Trump withdrawing from the Paris climate accord.

“What happened?” Mr. Khaled asked, staring at his iPhone.

How about his thoughts on climate change, more generally?

“I hear about it,” he said. “I’m not educated enough to know exactly how in-depth it is but obviously, it’s serious. I pray that somebody has the power to make things better for the world, and our climate, and our kids, and for us to breathe fresh air.”

Mr. Khaled, who is Muslim, also prays immediately after he wakes up: “A.S.A.P., to the east.” He then takes his 8-month-old son with Ms. Tuck, Asahd (Arabic for lion), out to a grassy plateau that borders the master bedroom. “I’m going to make some bonsai trees, get the grass better, I’m going to get some flowers,” Mr. Khaled said.

On this June afternoon, though, there were more pressing priorities: meeting his manager, who had rushed from a SoulCycle class to the house; reminding his followers about the impending release of “Grateful”; and washing the dye out of his hair and beard. “I might look crazy,” he said. (A line that could have been drawn with a Sharpie marked where his hair ended and forehead began.)

As Mr. Khaled shuffled to the shower, seven members of his staff — many of whom would join him on a coming vacation in the Bahamas — milled about the kitchen while “Legally Blonde” played on a TV tuned to the E! channel. 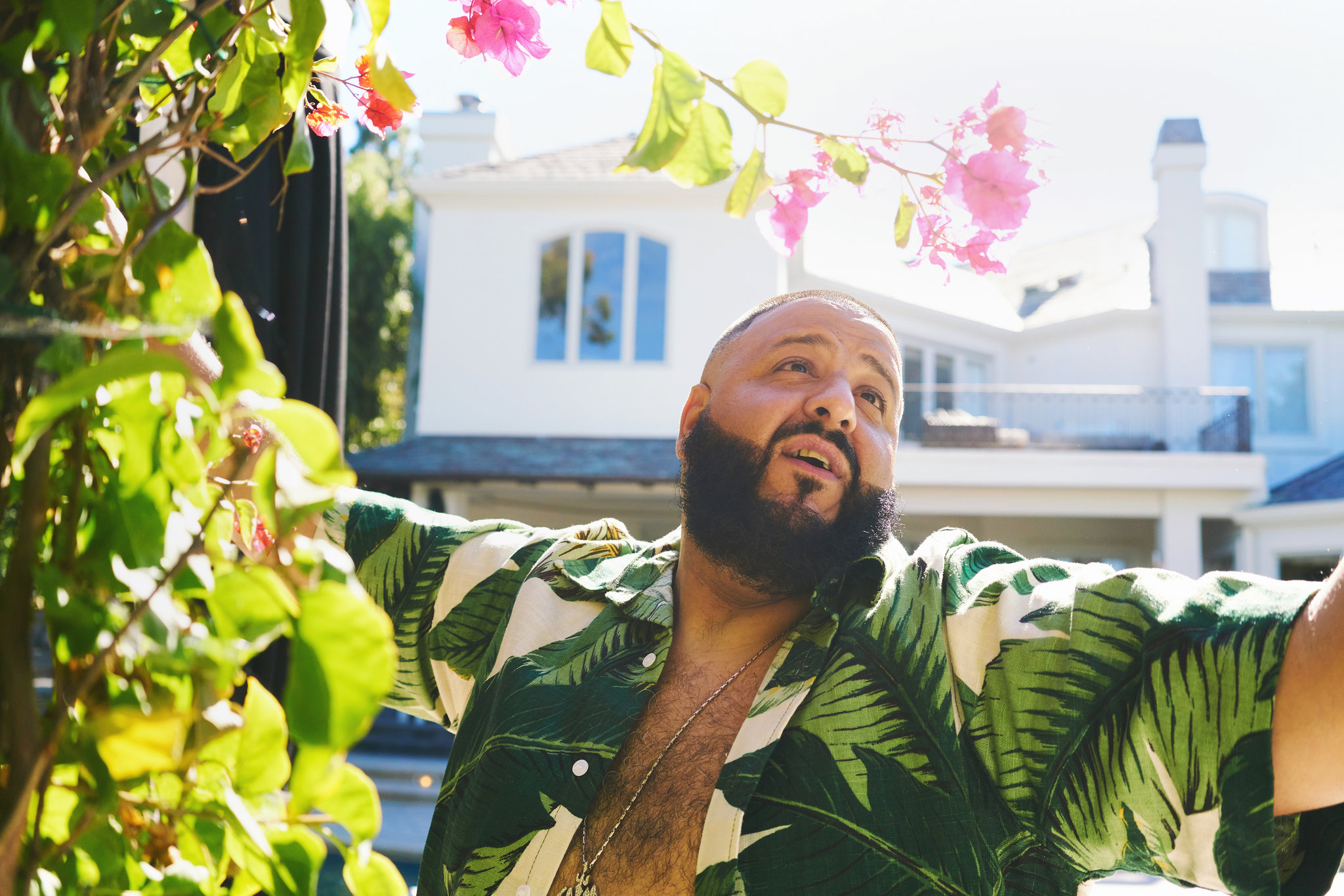 “Say I had to get on a conference call, I’d go outside by the hammock, by the flowers, and just sit there,” Mr. Khaled said. “I really get close to the flowers.”

Ivan Berrios, 25, Mr. Khaled’s photographer, and Chris Smokes, 30, Mr. Khaled’s lifestyle consultant (asked how he got that title, Mr. Smokes said, “I kind of created it myself”), picked up a pair of carnation-pink headphones and contemplated how to shoot them for the coffee-table book they’re planning. Mr. Khaled’s hairstylist, “JC Tha Barber,” showed them a trailer for his reality show. A chef poured a viscous yellow sauce into small plastic cups. Above her, frosted glass cabinets offered a window into the dichotomy of a new father who makes a living making party music: Ciroc vodka, whey protein powder, baby formula.

That incongruity extended to other parts of the home. A Baby Einstein toy sat on an immaculate white couch. Gucci shopping bags shared a shelf with board books. In the master bedroom, a bassinet stood next to rubber-banded wads of cash and seven gleaming watches. Mr. Khaled strapped on one from his collection, a rose-gold, diamond-encrusted Patek Philippe, to give a tour of his backyard.

“Where my phone at?” he called over his shoulder, stepping out onto the lawn. Someone said it was inside. “How’s that make any sense?” Mr. Khaled replied, incredulous. “Tell Kiko to come over here and Snapchat.”

Mr. Khaled squinted up at the sun and unbuttoned the leaf-printed shirt hugging his middle. “I’m going to have to do a Don Johnson,” he said.

The lifestyle newsletter from the Styles, Travel and Food sections, offering the latest trends to news you can use.

He bent down to caress the yellow petals of a marigold. “I always feel my flowers, I touch them and I tell them I love them,” he said. “This flower right here, I remember when it wasn’t looking as beautiful. I see them grow and I put that in life perspective. If you take care of something, look what happens. It’s like eating healthy, it’s like working out.”

In the courtyard was a waterfall-laden garden of hydrangeas and poppies that Mr. Khaled called Jerusalem, “because I feel like I’m not in America right now,” he said. “I feel like I’m in the Holy Land.” In the backyard, a lemon tree bore fruit that looked ready to pick. “Sometimes you got to do what you got to do,” Mr. Khaled said, reaching up to rip a lemon off its stem. A thorn stuck his thumb, and he started bleeding. He called over his shoulder again: “Can someone get me a napkin?”

Mr. Khaled’s free-form manner is part of his appeal to marketers trying to reach millennials who roll their eyes at traditional, polished media. He has acted as a spokesman for Ciroc, the ride service Lyft and Silk’s plant-based milks (“I do plants,” he said in a 2016 Silk ad, holding up a smoothie of almond milk and bananas).

While new endorsement offers come in “all the time,” he said, he works only with companies that accept him as he is. “I only know how to be me,” he said. “Say I misspelled something on Snapchat or social, that’s just me. If it’s me loving my flowers, me in the studio, me with my son, I’m just being me. I don’t know what else to do.”

But of course authenticity, as just being oneself is called these days, requires a lot of effort.

Back in his house, back on Instagram, Mr. Khaled watched a day-old video of himself dancing at a radio station, jovial and blustering.

“People don’t realize the work behind the scenes, they just get to see the victories and the finished product, but it’s a lot of work and not everybody can handle it,” he said, eyes fixed on the screen. “A lot of people can’t handle success, either. I can.”

Even while holding a watering can.