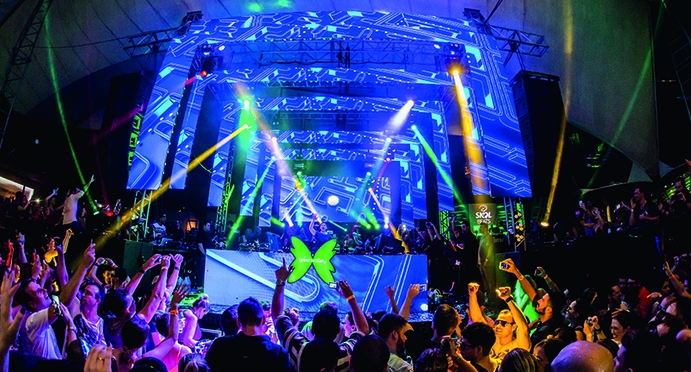 Green Valley has been in the top three of this poll for the past few years, and shows no sign of fading away. This magnificent electronic music playground didn’t exist ten years ago — in 2007 it was nothing more than a makeshift tent in the middle of an open airfield, set up to host a local rave. Carl Cox headlined that first event, entertaining thousands in his inimitable, infectious way, and the Green Valley partners set about transforming the space into a festival-style jungle superclub. Set in the south of Brazil, in the region that’s been dubbed ‘Brazil’s Ibiza’, it’s a wonderful place to party.

When the sun comes up on the club in the morning, the beautiful natural surroundings are fully revealed — a green valley setting, no less. The main stage is the first arena you come to on entering — after you pass the merchandise shop and trophy cabinet — and pretty much every big name you can think of has plied their wares here. In the last year they’ve staged everyone from David Guetta to Claude VonStroke, Hardwell to Mark Knight, and the appearance of their two biggest Brazilian residents in the Top 100 DJs poll — Vintage Culture and Alok — has a lot to do with their big shows at Green Valley. While the main stage boasts all the latest tech wizardry — LED panels, CO2 shots, lasers synchronised through timecode technology, etc. — the second stage, The Underline_, is darker and more immersive. It still has a pukka soundsystem, of course, and a great view over the artificial lake constructed as GV was developing. And on special occasions, such as the recent DJ Mag Carnival fiesta, a third stage — resembling another festival stage — is opened for more underground sounds.

Green Valley really is one of the global dance community’s greatest success stories of recent years, and there’s even talk of them setting off on a world tour to further publicise what’s great about their brand.