A disc jockey (DJ) is a person who mixes different sources of pre-existing recorded music as it is playing, usually for a live audience in a nightclub or dance club or via broadcasting. A DJ performing at an event using record turntables and a DJ mixer, a small mixer used to transition between songs. 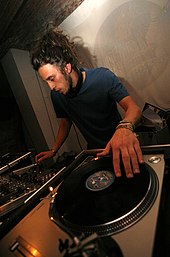 Originally, the “disc” in “disc jockey” referred to gramophone records, but now “DJ” is used as an all-encompassing term to describe someone who mixes recorded music from any sources, including cassettes, CDs, or digital audio files on a CDJ or laptop. DJs typically perform for a live audience in a nightclub or dance club or a TV, radio broadcast audience, or in the 2010s, an online radio audience. DJs also create mixes, remixes and tracks that are recorded for later sale and distribution. In hip hop music, DJs may create beats, using percussion breaks, basslines and other musical content sampled from pre-existing records. In hip hop, rappers and MCs use these beats to rap over.

DJs use equipment that can play at least two sources of recorded music simultaneously and mix them together. This allows the DJ to create seamless transitions between recordings and develop unique mixes of songs. Often, this involves aligning the beats of the music sources so their rhythms do not clash when they are played together, either so two records can be played at the same time, or to enable the DJ to make a smooth transition from one song to another. An important tool for DJs is the specialized DJ mixer, a small audio mixer with a crossfader and cue functions. The crossfader enables the DJ to blend or transition from one song to another. The cue knobs or switches allow the DJ to pre-listen to a source of recorded music in headphones before playing it for the live club or broadcast audience. Previewing the music in headphones helps the DJ pick the next track they want to play and cue up the track to the desired starting location so it will mix well with the currently playing music. DJs may also use a microphone to speak to the audience; effects units such as reverb to create sound effects; and electronic musical instruments such as drum machines and synthesizers.

The title “DJ” is also commonly used by DJs in front of their real names or adopted pseudonyms or stage names as a title to denote their profession (e.g., DJ Jazzy Jeff and DJ Q-bert). Some DJs focus on creating a good mix of songs for the club dancers or radio audience. Other DJs use turntablism techniques such as “scratching”, in which the DJ or turntablist manipulates the record player turntable to create new rhythms and sounds. DJs need to have a mixture of artistic and technical skills for their profession, because they have to understand both the creative aspects of making new musical beats and tracks, and the technical aspects of using audio consoles, professional audio equipment, and, in the 2010s, Digital Audio Workstations and other computerized music gear. In many types of DJing, including club DJing and radio/TV DJing, a DJ also has to have charisma and develop a good rapport with the audience. Professional DJs often specialize in a specific genre of music, such as house music or hip hop music. DJs typically have an extensive knowledge about the music they specialize in. Many DJs are avid music collectors of vintage, rare or obscure tracks and records.

Hip hop DJ Jazzy Jeff, who is also a record producer, manipulating a record turntable in England in 2005.

There are several types of disc jockey. Radio DJs or radio personalities introduce and play music that is broadcast on AM, FM, digital or Internet radio stations. Club DJs select and play music in bars, nightclubs or discothèques, or at parties, raves, or even in stadiums. Mobile DJs travel with portable sound systems and play recorded music at a variety of events. Some mobile DJs also serve as the master of ceremonies (MC) at weddings or other events, directing the attention of attendees, and maintaining a room-wide focus on what is included in the event’s agenda. There are also many competitions for DJs that specialize in different turntablism techniques, such as mixing, hip hop music-style “scratching” or other kinds of techniques.

Other types of DJ use musical performance techniques that allow them to be categorized as performing musicians, depending on the situation. Hip hop DJs not only select and play music using multiple turntables (or other sound sources) to back one or more MCs or rappers, but they also perform turntable “scratching” to create rhythmic and percussive sounds and create sound effects and beats. Hip hop DJs and are also often songwriters or music producers who use turntablism and sampling to create backing instrumentals for new tracks.

In reggae, the DJ (deejay) is a vocalist who raps, “toasts”, chants or chats over pre-recorded rhythm tracks. The individual who helps the DJ by selecting tracks or records to be played is called the selector.[1]

Many electronica artists and producers who also work as DJs often perform music by combining turntablism with keyboards, digital musical instruments, drum machines or live electronics. Electronica, hip-hop or reggae DJs also often collaborate and play live music with bands and musicians from several musical genres (rock, heavy metal, jazz or even classical music), using turntables and electronics as musical instruments. According to a 2012 study, there are approximately 1¼ million professional disc jockeys in the world.[2]

The songs, tracks and beats a DJ picks to play and the style in which the DJ mixes them defines a DJ’s style. DJs are often connoisseurs of various music genres, and they often spend time in used record stores searching for rare or obscure tracks to use in their club sets. DJs also use DJ mixers to transition from song to song in different ways. One key technique used by DJs for seamlessly transitioning from one song to another is beatmatching. The DJ’s style can and should be pliable, depending on what club he or she is playing in and what kind of music is expected of the DJ (e.g. a house music dance requires a different set list than a rave or a techno event).[3] The DJ also has to “read” the mood of the dancers, and pick songs or styles of music that will keep the dancers on the dance floor.

0 Replies to “What Is A Disc Jockey or Dee Jay”