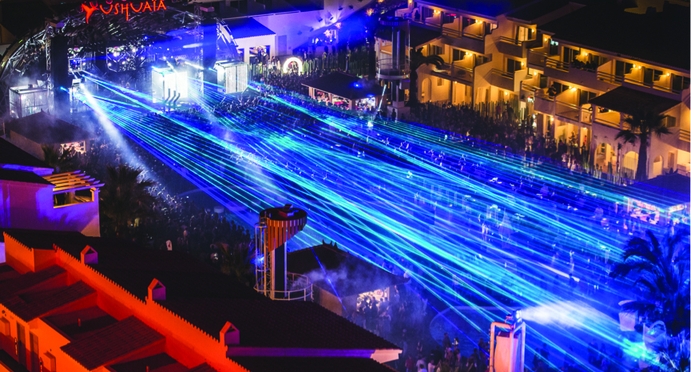 Ushuaïa Ibiza is a party spot that needs little in the way of introduction. A five-star luxury beach hotel by day, and clubbing paradise by night, the seven-year-old venue boasts heart-stopping views of the Mediterranean, while championing some of the biggest DJ names on the planet. Since its inception in 2011, Ushuaïa has been unique in its ability to throw day parties, too — since there aren’t many other places where you can catch acts whilst gradually bronzing under the glare of the Balearic sun. It’s a formula that means they’ve consistently been able to blow their competition out of the water, and the Playa d’en Bossa venue is a staple on the checklist of any serious Ibizan partygoer.

Over the past year Ushuaïa has seen EDM heavy-hitters such as Steve Aoki, NERVO, Martin Garrix, Hardwell and David Guetta (‘presents BIG’) return time and time again to its punchy system and famed pool. Though its flashy guests and state-of-the-art LED screens aren’t matched by the club décor itself, which is actually fairly pared-back and minimal.

This coming season, ANTS — Ushuaïa’s most popular residency by far, counting artists such as Joris Voorn, Kölsch and head-honcho Andrea Oliva as regulars — are letting their colony run riot from June until September. While the Ushuaïa Entertainment group have just unveiled an exciting new chapter — Hï Ibiza. Set in what was formerly Space, it’s set to be one of the biggest talking points of the summer ahead, and could even prove a future rival to the company’s flagship venue.