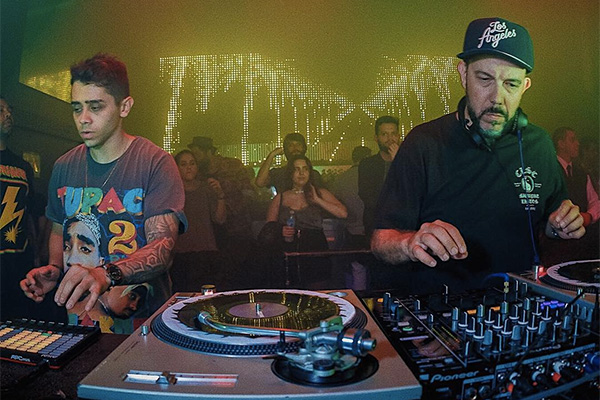 The rise of Latin music over the past year or so has been dominated by artists from Spanish-speaking countries. However, Tropkillaz, who are from Portuguese-speaking Brazil, are looking to change that. After conquering their home country and the global open-format DJ scene, the duo is taking their unique blend of hip-hop, dance music, and Brazilian sounds to a larger audience.

Comprised of veteran hip-hop producer and turntablist Zegon and the younger but equally talented Laudz, Tropkillaz combine the best of both generations. They also incorporate a variety of styles, including trap, twerk, hip-hop, and dancehall. Tying it all together is a foundation of baile funk and other Brazilian influences.

Formed in 2012, Tropkillaz quickly became a favorite in Brazil and the global open-format DJ community, receiving early support from DJ Jazzy Jeff and Yellow Claw. Their remixes and edits have since been supported by influential DJs like Diplo, A-Trak, Z-Trip, and TWRK.

Now, after five years of crafting DJ favorites, the duo is working on their debut album. The project, which is due this year via Universal Music Group, marks a new direction for them. It includes tracks with traditional song structures, not just club and festival anthems. The timing is ripe, as Latin music continues to grow worldwide.

We spoke with Tropkillaz a couple of days before they dropped their Aloe Blacc-assisted single, “Milk & Honey.” The song, which is currently No. 8 on DJcity, is the lead track from their forthcoming album.

Brazil isn’t known for its bass music scene. How did you get into that style?

Zegon: We made bass music way before the EDM-trap scene got popular. We started making instrumental music with heavy 808 subs and samples like when we used to produce hip-hop beats but enhanced it with build-ups and drops. Brazil had a big drum and bass scene in the late ‘90s to early ‘00s. I consider some of the biggest DJs from the scene like Marky, XRS, and Patify as the godfathers of Brazilian bass music. And the original funk carioca a.k.a. baile funk is the Latin cousin of Miami and booty bass. Can it be considered bass music? We think so.

You got a lot of support from DJs early on in your history. How did you manage that?

Zegon: I’ve had a long turntablist and DJ career, and most of my DJ heroes and idols from the ‘90s became my good friends. We’ve played gigs together in São Paulo and all over Brazil. They include Q-Bert, Z-Trip, Mix Master Mike, Shortkut, Craze, A-Trak, Jazzy Jeff, Cut Chemist, Nu-Mark, and many others. It happened naturally. I believe it was because most of the turntablists were looking for a way to fit into the new scene. They were looking for tools, edits, and that’s pretty much how we started, making classic club tunes edits. We got mad support from them and all of the following generation like the Red Bull 3Style competitors. We also got big support from the new up-and-coming scene as well.

Most DJs in the dance world use CDJs. Why do you use turntables?

That’s very simple! [laughs] The feeling and touch of turntables are incomparable. They’re better for scratching and playing doubles. We have nothing against new technology, though. Sometimes it’s hard to stick to turntables because we see so many dusty and sh#tty ones at clubs, especially in Brazil and Europe. We also use Ableton Live and AKAI’s APC controller. Our live performances are a mix of new and old styles.

Brazilian music is distinctive from other Latin American styles. Why?

We have our own types of melodies and harmonies. Brazilian music is pretty unique in terms of rhythms, too. There are not as many Portuguese speaking countries as there are Spanish speaking countries. And we have more afro influences and our own style of jazz, bossa nova.

You began incorporating more Brazilian sounds in your tracks a couple years ago. What inspired you to embrace your roots?

We felt like that would be the only way to have a signature sound. We started with tunes that could be from any contemporary producer, but a little different because we were sampling hip-hop, which not many people were doing at the time. After releasing a few songs and gaining momentum, we started incorporating more and more Brazilian sounds and textures.

Who are your Brazilian influences?

Who are some newer Brazilian artists that we should know about?

What made you want to work with Aloe Blacc?

Zegon: We’ve known Aloe since his beginning at Stones Throw Records in 2006. I played a few sets at The Do-Over with him on the mic and the vibe was incredible. But the main reason is that we wanted to start making big songs, not only DJ tunes. Aloe is the perfect feature to show that we can make songs like that without losing our personality and style.

Who else is going to be featured on your album?

Our next single is with Major Lazer, MC Kevinho, and Busy Signal. We have songs with lesser known artists and songs with mainstream names that we can’t reveal yet.

0 Replies to “Tropkillaz: Taking Brazilian Music to the Global Stage”