Exchange sits in the historic core of downtown Los Angeles, in what was formerly the Los Angeles Stock Exchange building. Brokers vacated in 1986 when the Pacific Coast Stock Exchange shut down, and the space remained empty until 2008, when a two-year renovation began to turn it into Exchange nightclub. It currently spans 25,000 square feet over four floors, with care towards preserving as much as the original interior as possible. While the architecture might take you back to a different time, the tech and music within are future-forward. 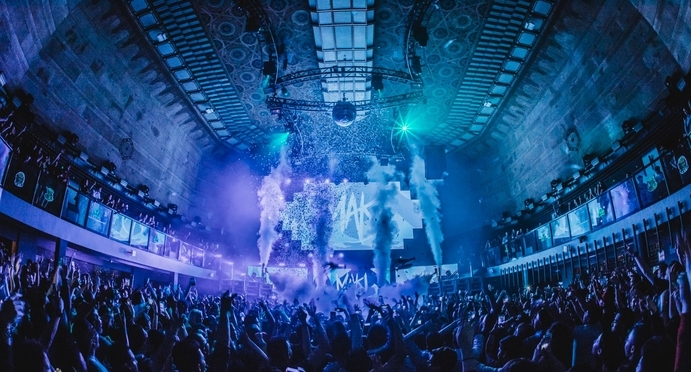 Exchange sports a Funktion One system with new EVO6 speaker cabinets, over 300 LED lighting fixtures, four lasers, and a massive floor-to-ceiling video wall. They’ve also been live-streaming about half of all their events as of late, using a dynamic 8-HD camera setup that feeds both into Facebook and app Grooveo (we recommend tuning in on Facebook, where you can experience the events in 360-degree video live). They book a spectrum of acts, from AC Slater to Martin Garrix to MSTRKRFT, and play host to Insomniac’s Awakening Fridays and Bassrush DTLA, meaning there’s a sound and night for every taste.