The rapper continues his stream of invective against the president in a new interview, saying ‘his election was such a disappointment to me about the state of the country’

Eminem has attacked President Trump in a new interview, saying: “I get almost flustered thinking about him – that’s how angry he makes me.” 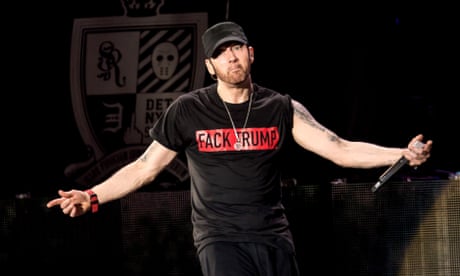 The woke Slim Shady – understanding Eminem in the age of Trump

In the interview with Vulture’s David Marchese, the rapper said Trump “makes my blood boil … I want our country to be great too, I want it to be the best it can be, but it’s not going to be that with him in charge.” He added that he initially thought that the billionaire businessman might be a fresh voice in US politics, but his opinion changed after Trump’s infamous campaign speech in which he referred to Mexican immigrants as criminals and rapists. “From that point on, I knew it was going to be bad with him. What he’s doing putting people against each other is scary fucking shit. His election was such a disappointment to me about the state of the country.

“The people that support him are the people he cares about the least and they don’t even realise it,” he added. “He’s got people brainwashed.”

The comments come after Eminem rapped a much-discussed freestyle at this year’s BET Hip-Hop awards, promising a “fork and dagger in this racist 94-year-old grandpa” as he took Trump to task over gun reform, his Twitter spats, his condemnation of the “take a knee” protests and his handling of hurricane emergency responses in Puerto Rico.