In the final scenes of Chris Brown: Welcome to My Life, a 2017 documentary about the R&B singer, Brown exits a Los Angeles courthouse. It is March of 2015 and a judge has just ended Brown’s six-year probation. The artist – his hot pink hair serving as a pop star counterbalance to his tailored suit – is thrilled.

“No more problems. No issues. Nothing. We’re great,” Brown says to the camera while a van carries him away from the courthouse. “I don’t even know what to say right now. Probably just going to go to the house and play with my daughter and figure it out from there.”

Coming at the end of the documentary, this scene is a framed as a redemptive, course-correcting moment for Brown, whose legal troubles began in 2009 when he pleaded guilty to felony assault charges after beating his then girlfriend Rihanna.

Born in Virginia in 1989, Brown was discovered when talent scouts came to a gas station owned by his father. Within months, Brown was recording demos in New York and signed to Jive shortly thereafter. His eponymous 2005 debut album entered the Billboard 200 at number two and delivered the hits Run It! and Gimme That. In 2007, Brown toured as an opener for Beyoncé, appeared in an episode of MTV’s My Super Sweet 16 (retitled Chris Brown: My Super 18) and delivered his second album, Exclusive. The LP included the smashes Kiss Kiss and Wall to Wall, both undeniably effective tracks demonstrating his agility in fusing R&B with the era’s auto-tuned strain of pop-leaning hip-hop. Brown’s breakout moment came at the 2007 MTV Video Music Awards when he performed a medley of his hits in tandem with choreography that earned him comparisons to his idol, Michael Jackson. (It helped that he did a brief interlude to Billie Jean.) The performance featured a cameo from Rihanna, who strutted onstage for a verse of her own megahit Umbrella. While the pair had been quiet about their relationship, the chemistry was palpable.

This love story crumbled a year and a half later, after a brutal argument inside Brown’s rented Lamborghini on the night before the 2009 Grammy Awards. (The fight began after Rihanna discovered a text from a woman Brown had been in a sexual relationship with.) A police report of the incident stated Brown hit Rihanna’s head against the car window, punched and choked her, bit her ear and threatened to kill her. Both were scheduled to perform the next day at the Grammys. Both cancelled. The photo of Rihanna’s battered face was unavoidable in the news.

Brown’s formerly pristine public image imploded overnight. He says that after the incident he considered suicide and didn’t leave his house for three months. “Words cannot begin to express how sorry and saddened I am over what transpired,” he said at a March 2009 hearing. He pled guilty to a felony assault charge three months later, with his plea deal including five years probation and 1,400 hours of community service and a domestic abuse program. A report obtained by CNN during sentencing revealed two previous incidents of domestic violence between Brown and Rihanna, one in Europe and one during a trip to her native Barbados.

“I felt like he made that mistake because he needed help,” Rihanna, who showed up to several of Brown’s hearings, said during this period.

Initially, Brown seemed to be on a swift path out of the legal system. At his first probation hearing, the judge commended him for the community service and counseling he had completed and allowed him to leave the country for concerts. His next three hearings were also positive, and the judge eventually removed the order preventing Brown from having contact with Rihanna. They started seeing each other off and on again during this time.

But angry outbursts began defining Brown’s image. During a March 2011 appearance on Good Morning America, he became so enraged by host Robin Roberts questioning him about Rihanna that he went to his dressing room, punched a window until it cracked, then walked into the street shirtless. He was on the show to promote his album FAME – which Brown said stood for both “forgiving all my enemies” and “fans are my everything” – which won the 2012 Grammy for best R&B album.

Four months later, Brown and his entourage got into a fight with Drake and his entourage at a New York club, reportedly after Brown sent Drake a bottle of champagne and Drake (who had been seeing Rihanna), sent a note back that read, “I’m fucking the love of your life.” In January 2013, Brown was accused of punching and threatening to shoot singer Frank Ocean at a Los Angeles recording studio. The following month he totaled his Porsche after being chased by paparazzi. Brown was then accused of punching a woman at a nightclub. (No charges were filed after any of these incidents.)

The drama continued in October of 2013 when Brown and his bodyguard were accused of assaulting a man in Washington DC after the man stepped into a photo Brown was taking with a fan. Brown spent the night in jail after allegedly punching the man in the face and entered rehab shortly thereafter, although he was asked to leave after reportedly smashing the window of his mom’s car after a therapy session.

He went to another rehab facility, where the staff reported improved behavior after a switch in his medication. (This same year Brown was diagnosed with bipolar II, a disorder characterized by depressive and hypomanic episodes.) In March 2014, he went to jail on a probation violation after being kicked out of rehab (Brown says it was a set up) and was ordered to serve 131 days in county jail. Here, Brown spent a lot of time in solitary confinement to avoid being singled out by other prisoners. He got an early release on 2 June 2014, kissed the ground outside the jail and went directly to Burger King.

But the problems didn’t stop, with the next two years characterized by a series of violent altercations in which Brown allegedly punched several people. He was not allowed to travel to Canada, Australia and New Zealand, and was arrested in August 2016 after a nine-hour standoff with police at his home in LA after a woman called 911 at 3am claiming Brown had threatened her with a gun. The outcome of that case remains unknown. 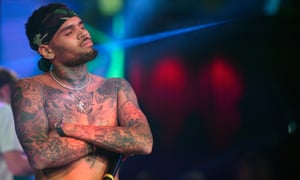 In June 2017, the same month as his documentary was released, a judge granted a restraining order against Brown to Karrueche Tran, his on-and-off girlfriend of the past seven years. The model alleged that Brown texted her threats including “Bitch I will beat the shit out of you” and “I promise you I will make your life hell”. (Tran had broken up with Brown in March of 2015 after finding out he had fathered a daughter, Royalty, while they were briefly separated.) It was during this period that Billboard published an investigative piece alleging Brown had developed serious addictions to cocaine, MDMA, marijuana, Xanax and lean. (Brown disputed the story in a now deleted Instagram post.) The party at Brown’s house at which Jane Doe was allegedly assaulted was in February 2017, during the period Billboard indicated was characterized by Brown’s heavy drug use.

Through all of these incidents, Brown has made music, much of it very well received. After FAME came 2012’s Fortune. This was followed by 2014’s X, which went platinum and featured guests including Usher, Tyga, Lil Wayne, Rick Ross, Akon, Jhene Aiko, Nicki Minaj and R Kelly. 2015’s Royalty was named after his newborn, while 2017’s Heartbreak on a Full Moon made headlines for containing 45 tracks and clocking in at over two hours. Reviews characterized the album as indulgent but said it had diamonds in the rough. Brown is currently touring behind Heartbreak on a Full Moon, playing dates extending into August.

0 Replies to “Chris Brown: the downfall of the disgraced R&B hit-maker”