Maybe you’re among the lucky ones to whom Santa Claus brought a cassette recorder. These eminently useful and enjoyable marvels of technology certainly rank among the most eagerly wished-for of all gifts, and they come in a great variety of forms, from simple battery-powered portables to the elaborate tape decks whose sonic finesse matches that of the fanciest stereo systems.

Whichever kind of recorder you have, there is the question of what type of tape to buy for it, to make your own recordings. With so many sorts of blank cassettes on the market, each claiming to be better than the next, the choice can be pretty confusing.

All these tape types have slightly different sonic flavors. One might sound more brilliant while another has a more mellow character, differences that one sound buff has compared to the fine distinctions between various brews of beer. As with beer, personal sampling may well be the best way to research these matters, but a few general guidelines might prove helpful.

The working part of any tape is the magnetic layer coated on the plastic backing. This layer magnetically holds the musical signal and consists of tiny metal oxide grains mixed into a so-called binder substance. Most tape manufacturers guard their particular formula for this layer as jealously as a Mexican cook guards his personal recipe for chili sauce, and it’s these proprietary formulas that are mainly responsible for the slightly different sound of each cassette brand.

For many years, there were just two basic types of cassettes: those using iron oxide as magnetic particles, usually called ferric tapes, and those using chromium oxide, called chrome tapes. Ferric tapes are cheaper, but chrome tapes tend to have a brighter sound with more clearly defined high frequencies and a quieter background. However, many brands of ferric tapes have recently been upgraded, using smaller and more evenly distributed magnetic particles to improve their response at the high end. (The small grain permits more sonic detail to be recorded, just as fine-grain photographic film yields sharper detail in pictures.) 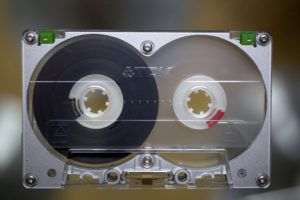 These improved ferric tapes offer a well-balanced and musically satisfying frequency response with notable smoothness of sound, and many listeners find them entirely adequate. Outstanding examples are BASF Professional I, TDK-AD, Fuji FX-1, Sony SHF, Maxell UDXL-1 and Scotch Master I. They all sell for about $4 to $5 for a one-hour cassette (C-60) and are often available at discount. Among the slightly higher-priced chrome cassettes, BASF Professional II is outstanding for added clarity of highs, exact definition of musical details and low background noise.

Quite similar to chrome cassettes in their bright and punchy sound are the so-called chrome-equivalent tapes, sometimes also called high-bias tapes. While they contain no chrome, they achieve close sonic resemblance to chrome tapes by using ferric particles chemically bonded with cobalt. The result of this sophisticated approach yields excellent sound, as witness TDK’s SA, Maxell’s UDXL-II, Sony’s EHF and Fuji’s FX-II. Along with the pure chrome tape, these high-bias chrome-equivalent tapes rank among the favorites of audio fans with good equipment who are seriously concerned with fidelity. Prices average about 50 cents more than for ferric cassettes.

To get the best possible results from different kinds of cassettes, you must adjust the circuits of your tape recorder to match the requirements of the tape. That’s why the better tape decks have selector switches by which the recorder can be 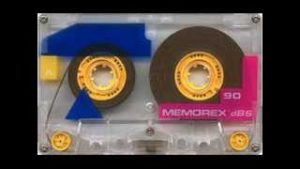 optimized for the kind of tape you choose. If your machine has no such switch, and some of the less expensive portables do not, probably it has been factory adjusted for ferric tapes, and you had better stick with them.

In addition to the basic tape types already mentioned, two other formulations have lately attracted attention. Among these are ferrichrome tapes, in which a thin layer of chrome is superimposed on a ferric substrate in an effort to combine the virtues of both materials. The chrome gives clarity to the highs while the ferric material adds strength to the bass.

The net effect of the ferrichrome combination is a rather dramatic emphasis on both the high and low ends of the sonic spectrum, which is not altogether natural but appeals to listeners with a flair for sonic extremes. It is useful for listening to music on car cassette players, when treble and bass are often drowned in road and engine noise and the added emphasis on top and bottom sounds renders audible what might otherwise be lost in what the late Cole Porter called ”the roaring traffic’s boom.” BASF, Scotch and Sony are among the principal manufacturers of such ferrichrome tapes, with list prices between $4 and $5.

If you’re planning to record your own cassettes at home for later listening on the road, you might also consider the excellent Loran tapes, available both in ferric and chrome formulation. They are made of a special heat-resistant plastic so they won’t warp or melt when left in a hot car during the summer, and sell for $5.55 (ferric) and $5.75 (chrome). 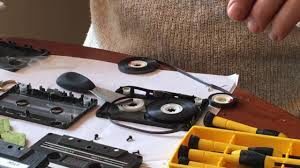 A tape type intended for unrelenting perfectionists is known as ”metal tape” because it employs pure metal particles instead of oxides. The main advantage is that these tapes accommodate a greater loudness range than any of the others. But this is needed only if you are making ”live” recordings of a musical performance through a pair of microphones or if you are copying the most advanced kind of digital disk recordings. In most other uses, the advantage of metal tape is hardly evident at all, something to be considered at a premium price of $8 or more per hour.

With all these choices, it’s a safe bet that you’ll find a cassette that suits both your tape recorder and your tonal taste. But it may take a little experimenting and comparing.

0 Replies to “A Guide To Buying Cassette Recorder Tapes”