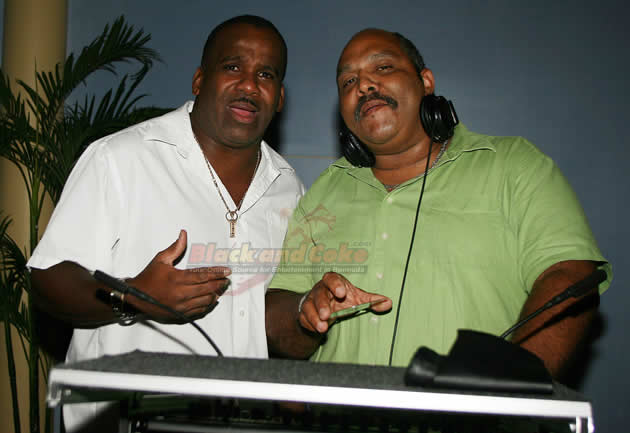 Craig “Bubbles” Daryl (right) and Malcolm “Lethal Weapon” Smith are two more of the hottest DJs in the island still today. Both said that DJ Cavon was a DJ that they will always look up to as one of the best ever on the Island of Bermuda. He was truly one of a kind. Still today they both work alongside each other doing many different parties all around the island of Bermuda. Malcolm “Lethal Weapon” Smith still plays alongside DJ Cavon at special events much more than any other DJs in Bermuda, and have been really good friends for many years. (Rumor has that he & DJ Cavon are “Best Friends”)  Malcolm & DJ Cavon can still pack a house when they get together at one venue. They are both respected in the community and have been in the games 35 plus years. They are very good jocks and old friends and have been for a while. 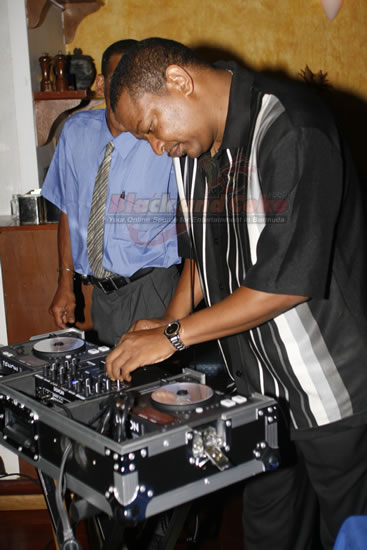 DJ Cavon Doing What He Does Best.

DJ Cavon’s father (Ross Simons), who himself loved music was a well know bass player, that played in several different bands in Bermuda at major hotel for tourist and locals. Bands like the Cha-Ro-Macs and many other groups were formed by his dad as well with different names. His dad back in the day used to hate the noise DJ Cavon would make when he was in his bedroom mixing and playing music loudly and over and over he would threaten to throw his equipment out the window if he didn’t turn the music down.  But music was simply in his blood and he loved it! His dad finally realize that it was a no win battle so he let him do his thing. In fact at that time his dad use to be a regular at Flavor’s Disco from back in the day. Eventually the day came when Cavon ended playing there were his fame begin to grow dramatically his dad went on to brag “that’s my boy playing music and rocking the house” like a proud dad would do.

Although DJ Cavon has been around for a long time he never really was recognized internationally in the USA as one of the best ever. (Which is still one of his dreams). However he continues to dished out dope mixes wherever he goes from the dopest private parties to the hottest spots in Bermuda and the USA. You can steam his mixes now at mixes at site like Mixcloud as well. He was well known at all the local radio stations in Bermuda the US as well.  He grew up listening to some of the best personality there, like Wayne I, L Roy RC Smith, The Captain, Sturgis Griffin. Lady T, Dr. G, Radigun and many other radio personalities in Bermuda.

Cavon prefers to listen faithfully listen to ballads more so then fast music (believe it or not), even though he had a love for the fast jams and the house music from back in the day and the old hip hop, his TRUE LOVE which no one really knew was his love for slow jams. He loved to listen to the quiet storm music programs on the radios in Bermuda and in the USA. “I truly believe that love songs have more meaning then fast jams.” he told me. “When listen to a slow jam I listen to the words more then the music. I take it seriously and go in a zone when I am chillin’ to it”.  Once you buy and listen to his collection quiet storm mixes you will be dying to hear more. He recently  down a compilation of classics which lasted 16 hours long called Old School Quiet Storm 21-23. He goes back to the 60’s 70’s 80’s and back up to latest jams of todays music as well. He says to me “You have to stay current and relative if you still want to be in the game” smiling.

Believe it when I say it you really will not be disappointed with any of the compilations. 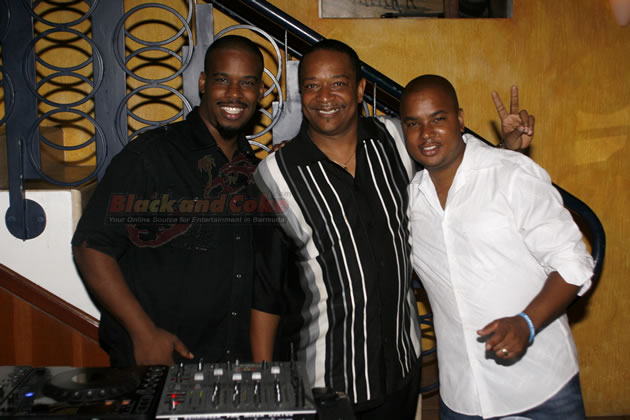 D J Kaos (left) is one of the newer (now retired) and hottest DJ that is on top of his game right now in Bermuda. DJ Kaos and DJ Cavon here do a special Old School Jam at “The G Spot” Greg’s Steakhouse which reforms to a nightclub after dark. DJ Kaos is always grateful to be standing around or even be in the presence of an icon like DJ Cavon (middle). He works with one of the top Promoters in Bermuda in the entertainment business Jansen (right). Whenever Jansen is involved in a party it sells out immediately. Kaos is not as active as he use to be but every now & then he would make an appearance. 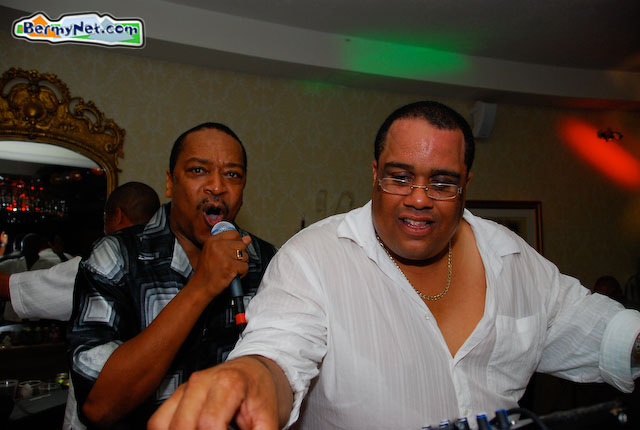 DJ Double S (retired) is currently a hot Old & New School DJ that is right in the footsteps of DJ Cavon and has enjoyed the pleasure of working with DJ Cavon as well. “DJ Cavon is a true Legend in the Business” he says while he is doing his thing to a crowd of 800 plus at the 5 star Fairmont Hamilton Princess Hotel. DJ Cavon in his element, picks up the mix to “PUMP UP THE CROWD” DJ Double S. 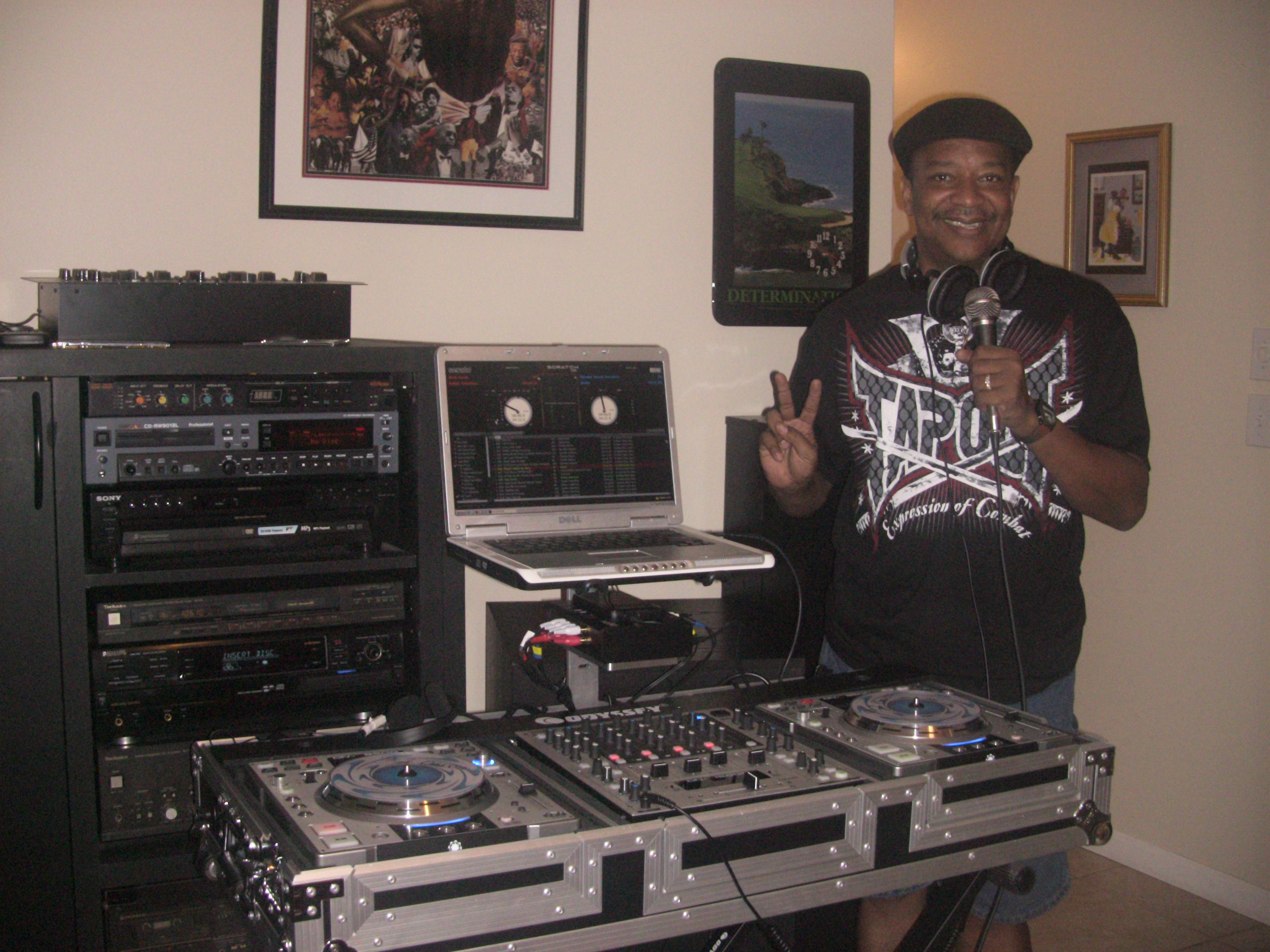 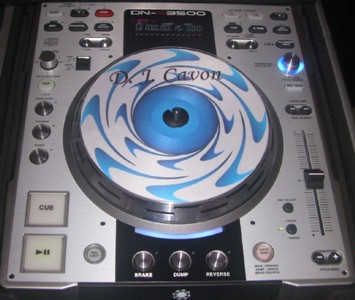 DJ Cavon has stepped up his game now and has Serato Scratch Live with DNS Denon 3500 CD Turntables. He said he likes to wear “Tap Out” gear when he mixes because it shows Expression of Combat when he is mixing jams. His collection of music he carries having Serato Scratch Live enables his mobile collection of music to over 100,000 songs on a single external hard drive in organized crates.  And now he can find a song with a click of a button when requested. “I remember carrying milk carton crates of vinyl records…phew…, glad those days are gone” he said.  “Times have changed but I personally feel your not a real true DJ if you weren’t hot while Vinyl was at its prime” he says. “Serato just makes a DJ very lazy, but I love it and wouldn’t trade it for nothing. Anyone can be a DJ now”  he said throwing up a Peace sign. He has recently upgraded to DDJ SX3 now seen below:- 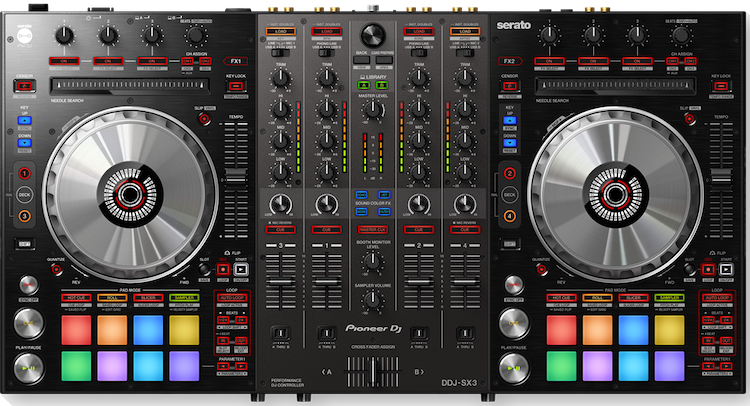 Ask any one from Bermuda about DJ Cavon of Flavors Disco from back in the day and they will tell you that he is the best they ever heard and there will never be another DJ like him. He was truly one of a kind. Flavors Disco put DJ Cavon’s talent on the map. That was one of or if not the greatest Clubs ever in Bermuda that catered to an older crowd. Even back then in the late 70’s. DJ Cavon was a young DJ in the late 70’s playing music for people nearly twice his age. (In fact I had mentioned early in this article that his Dad use to be a regular at this club, and he finally grew to like his son entertaining the older crowd. “That’s my son in that booth rocking the house” he would brag to all his friends.) “I guess all that noise in the bedroom years ago paid off for him.”  DJ Cavon is one of Bermuda’s number one original DJ’s. Ask anyone from Bermuda and they will tell you, he will never be replaced.

Being one of the hottest DJ’s in the Island of Bermuda, and sought from the Parish of Warwick, Ord Road DJ Cavon created classic combinations that even world renowned DJs are impressed with…DJ Cavon specialties include private & public parties, boat cruises, weddings, house & club parties as well as various social events. He played music for many 5 Star resorts in Bermuda. If you’ve never witnessed a pure genius mastermind at work you need to hit him up. His passion for music is definitely something that took him places other DJ’s never knew existed.

DJ Cavon’s dream was to play on a radio station in the USA on a “Quiet Storm Music” typesetting and still to this day would like to pursue that dream. He was known for playing some of the hottest slow jams ever. A lot of people around today are here because of his (babies were made and born after couples left Flavors Disco) ability to keep people on the dance floor slow dancing anywhere from 5-6 slow songs in a row. Of course he won’t get away with that now young people today don’t even know what slow dancing feels like. (They have been robbed). People back then in the Flavors error used to walk up in the booth and hand him $20 and as much as $50 to play “just one more slow jam”. And that was a lot of money back then..lol. You see he played all the slow jams people had heard and hadn’t heard.  Yes people “slow danced for that amount of time and not one person would leave a rammed packed dance floor.  This is how good DJ Cavon was back then and still is!  The “Quiet Storm compilation” is truly DJ Cavon’s thang. He was made for this! Check out his quiet storms on his site.

His methods were simple but unusual and we say that’s because, most DJs would take the hits off an album or CD and play only those hits. But he was the type of DJ that would fine tooth an album or CD and play all the other songs that people never really took the time to listen to. Therefore when he played music they always thought it was new music. This was just one of the things that put him on the map. 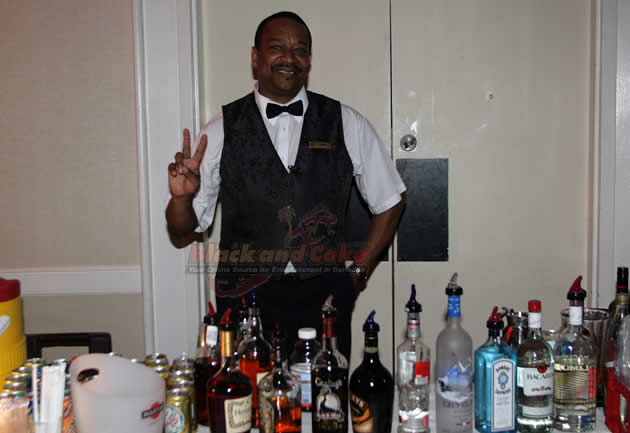 You can currently find DJ Cavon playing music in Bermuda part-time during the peak tourist season, at The Spinning Wheel Entertainment Complex  Rocking the house every Friday Night from 10pm-3am. This club in on Court St, Hamilton Bermuda.

Recently he has moved on to play at Henry VIII Pub & Restaurant on South Rd Southampton Bermuda. Where he now does “Turn Up Saturday Nights! there. There you would a mixed genre of music there, and yes the occasional slow jam. Be sure to check out all his live appearances to find out where and what he is doing, worldwide.

He also works seasonally at the Fairmont Hamilton Princess as a Bartender. Bartending is something he has known for more than 25 years, even back in the day while he was at the top of his game at Flavors he was always a bartender at his regular job and a very good, experienced one as well. He will make the meanest tropical drinks for you. His favorite is the Bermuda Triangle and the French Martini and Million Dollar Lady Martini.

So now he has taken the time to put together a compilation of quiet storm, R&B, House & Jazz, both old and new, for your listening pleasure. All available for immediate download in MP3 format. You will need a zip program to unzip the files after downloading them to your computer, which most computers already have on them if it is a current computer. You can find that online for free on the internet. I know that once you buy one mix it will lead to another, because the mixes are hot. Whether you’re chilling alone or with your honey, wife, husband, or friends they will do the job. They are great as well for just getting your groove on at parties and at home. You will not find any of the compilation download mix alike, all are unique. When you buy one of his compilations you will probably hear songs that you either never heard before or didn’t know that a certain artist ever sung that song because of DJ Cavon’s unique cherry picked selections.

His music will literally put you into a “zone” when you listen to these compilations one after the other continually.  Enjoy them and support DJ Cavon, he truly appreciates your business and rests assure this is money well spent on your behalf.